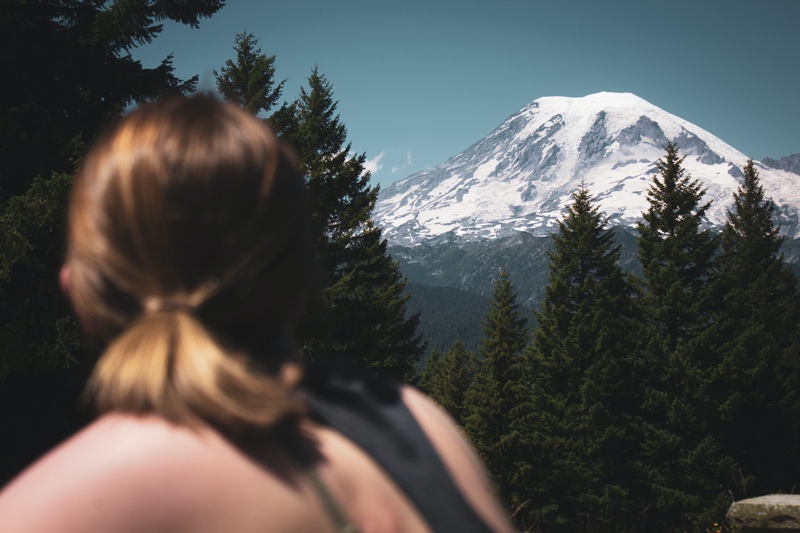 Three apples rolled aimlessly across the basket as I leaned into the grocery cart for more support. Halfway down the snacks aisle, I heard my name called and an acquaintance stopped me. “Is that you? What happened to you?” Looking sideways in a haze of pain, I replied, “I hurt my back in August, 2018 and haven’t been the same.” I threw some blue corn chips in the cart and shuffled past.

What I wanted to say is what I’m writing here. I was walking on a mountain with a fractured spirit and body crying out from years of exhaustion. My body finally gave in to the overwhelming grief that I only alluded to but for those close to me, knew it was aching loss of friends. I had personal struggles and deep regret for years missed with my family as I responded to God’s calling on my life.

January 1, 2018 my friend Belinda died. She profoundly touched my life because prior to our meeting, she was an atheist. She’s healed now, in the arms of Jesus. Two weeks later, my stepfather was found alone in his truck from a heart attack. He hadn’t been taking his heart medicine because he couldn’t afford it. Someone posing as woman in need on FaceBook, stole his identity, drained his accounts and he died destitute.

Over the course of the next few months, I lost three more friends and tried my best to lead Compassion That Compels. An unexpected surgery for myself led me to rely heavily on those that had a heart for CTC, but very much out of their skill sets. It brought me to my knees and I wondered if I could go on.

By summer, three more friends had passed. My mind was growing numb but my heart was bleeding. A text message from Lyndsie’s husband let me know on June 21st that she was no longer suffering. I read that text but in my ears, I heard her laughter and her joy was over my body. In a tight squeeze of sorrow, the tears and screams ripped through my body. Grief in agonizing shocks, splintered my faith.

All over again, I was holding my dying sister in law, Sonja, in my arms and later, cleaning her body with my sister in law, Pam. There was a stillness in the room and Pam, who was a nurse, wiped her with gentle strokes of mercy. My tears slid to my lips, stopped like a dam by my clenched teeth. I watched in panoramic view telling my daughter Grace, that her aunt whom she loved, was home with Jesus. I stumbled in my faith and tried to explain how Jesus who loved the little children, took her aunt and she would never feel her hugs and lavish love again. Helpless, as Pam, a woman I loved as a sister would have cancer invade her body, and once again tear into my family’s hearts.

I didn’t realize what was happening to me was PTSD.

My vulnerability retreated me and I knew I could no longer handle the trench warfare aspects of ministry brought to me. I thought by insulating myself, I’d buffer the storm that raged and be safe from the fury of cancer. I was wrong. Less than two months later, I lost another friend whose faith and determination forever set the mark for mine.

Two weeks later, and a few short steps on a mountain, my back gave out and my power was drained. Scans revealed disc issues, age, stress. My mental scans revealed depression, misplaced trust and I had no reserves for the hurricane-like devastation that would ensue. I haven’t had a day without pain since then. My spine moved away from the nerve pain and my hip responded by shifting laterally, like a scoliosis. To me, it became symbolic of pulling away from the entanglements of grief and a retreat from the sorrow, but the searing pain stayed in my frame.

September 10th, my friend Renee passed. Renee was a teacher who showed by her life, that there is peace on the battlefield. She had wanted to help and did so by collecting favorite Bible verses from other brave overcomers. These verses are placed throughout our prayer journal.

By the close of 2018, cancer had torn eight friends from my heart and left me shattered. Compassion That Compels continued growing and relentlessly, I did my best. I tried. Was I perfect? No, I’m flawed and human just like everyone else. Spring, 2019 brought devastation and growth. Funny how you begin to flourish when you’re not choked by the weeds. I learned what love really was by seeing the darker side of humanity and understanding that love does not delight in evil. But rather, true love finds joy in truth and righteousness. It brought me back to this verse, from Hosea 10:12:

I said, ‘Plant the good seeds of righteousness, and you will harvest a crop of love. Plow up the hard ground of your hearts, for now is the time to seek the LORD, that he may come and shower righteousness upon you.’

This summer, I took steps back from CTC and vacationed with my family. I rediscovered me in the beauty of Europe and in a flow of love and joy that I so missed and longed for. When I returned home, I had a renewed sense of purpose but somehow, my body wasn’t ready to be driven again by my high capacity mind. The pain returned full force and my hip moved again.

It’s been over six weeks and I haven’t walked upright. Last month, I underwent the final chapter of a surgery that began with a double mastectomy years ago. While in the hospital, I had a severe allergic reaction that put me in anaphylactic shock. I felt my throat close from within and heard my mind saying, “I am in distress.” Later, two additional reactions and prescriptions later, I began to recover. I’m grateful for the surgery because it freed me and my new scars remind me of how very brave I am.

I am determined to heal my back and it begins with rest. Psalm 84 tells of the longing to be with God, the giver of life, on a pilgrimage to a sacred place. As those past sojourners, I too travel the Valley of Weeping on a pilgrimage of healing. The autumn rains will refresh my soul and in the valley of darkness, God makes a door of hope. These next few months, I’ll be popping in a bit here and there. Most days, I will be planting those good seeds and harvesting a crop of love. Whether I am on that mountain or staring at it, immovable in the valley, God is with me. Thank you to every dear friend for holding my hands and heart with gentle care. Your prayers help push me through the valley to the mountaintop!